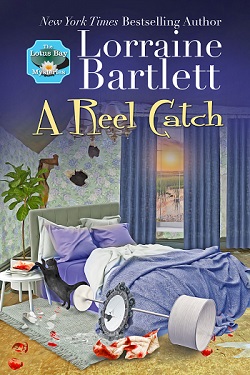 Swans Nest Inn is about to open, and Kathy Grant solicits her BFF Tori Cannon to help spruce up her property at the marshy end of Lotus Bay, only they didn’t count on finding a body. Who was he? What’s his connection to their friend Paul Darcy? Meanwhile, two entrepreneurs with vast business ties are interested in helping Tori reopen the Lotus Lodge, and their real motives are as murky as the bay after a storm. Will Swans Nest open on time? Will the Lotus Lodge reopen at all? 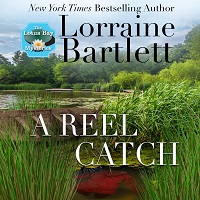 “A REEL CATCH is a fun cozy mystery featuring likable women characters dealing with the struggles of small business ownership. Lorraine Bartlett does a phenomenal job at showcasing strong women in non-traditional roles. I cried, laughed, and cheered right along with Tori, Kathy, and Anissa. The Lotus Bay Mysteries series is the first series I’ve read by Lorraine Bartlett, but it definitely won’t be the last!”
–Fresh Fiction

“The unconditional love and affection between the three women is enviable and a delight, proving that their relationships will outlast any they have with men. The humor flows naturally and continuously, but the banter never overshadows the genuine heartfelt moments or the timely topics. The setting truly comes alive with descriptions of local watering holes and local home renovations, but the side characters and these three extraordinary women are the stars.”
–Kings River Life Magazine

Wonderful word pictures show us the beautiful setting of Lotus Bay. The complexity of the mysteries past and present are challenging, as is trying to learn about what happened years ago without alienating current friends. Plot twists and unexpected visitors keep the ladies hopping. I was surprised at finding who the real bad guy was and why! All loose ends are tied up, leaving me look forward to the next mystery in the series. I highly recommend this to fans of the author, of young entrepreneurs, and a challenging, well-written cozy mystery.
–Open Book Society

“The author did a great job in staging this mystery where the suspect list was small, but it was the information gleaned that narrowed the suspect list. An enjoyable whodunit that satisfied.  I was happy with some of the resolutions regarding the girls’ future. I look forward to the next book in this delightfully appealing series.”
— Dru’s Book Musings

“It gets pretty crazy and rocky at points for the women, but they are strong and determined gals who don’t fade away at the first sign of adversity.
“This is a series I would highly recommend to anyone who loves a good mystery and wants to see strong women working together to solve any crisis thrown at them.”
–Dig The Reviews

Kathy knew the drill. After all, she’d been interrogated by the Sheriff’s Department on more than one occasion following the terrible events of the previous summer. The bad guys hadn’t yet gone to trial, so there was still that horror to come.

What she minded most was the suspicion law enforcement leveled at one when it came to reporting a dead body.

“Detective Osborn,” she said, unable to keep the testiness from her voice, “The guy in the water has obviously been in soak for quite a while, so it’s not like we killed him.”

Osborn had been the detective in charge of the Michael Jackson homicide the year before. He’d been a sour SOB then and his personality had not undergone any improvement, although he seemed to have lost the beer belly and gotten a decent haircut. Maybe he had an upcoming court appearance and wanted to look good. Kathy couldn’t imagine any woman actually being attracted to the man. But then he was middle-aged, and she still had more than a decade to go to get to that point in life.

“Are you crazy?” Anissa Jackson asked, giving the detective the fisheye. “There’s a reason black folk like me don’t like to talk to white cops like you—” she began even more testily than Kathy.

Kathy waved her hands in the air as though to erase Anissa’s words. “Let’s not go there,” she placated. “It was Tori and I who found the jacket in the water—with the guy still in it.”

A still-shivering Tori stood nearby. Despite the fact she’d changed clothes and donned warm shoes, hat, scarf, and boots, she complained that she couldn’t seem to get warm. What she needed was to be inside with a lap robe, a cat, and a big mug of cocoa. “We figured he must have fallen overboard while hunting or fishing last fall. Or maybe crashed through the ice on his snowmobile.”

“A very good theory,” Osborn said, “except for one thing. Nobody around here has been reported as missing.”

“Well, then I’m stumped,” Kathy said wrapping her arms around herself in an effort to keep warm. She was ready for cocoa and a lap robe, too. “Is it really necessary that we stand around in the cold while you guys do whatever it is you do?”

Osborn frowned. “I suppose not. But I’m not done questioning you.”

“Fine. We’ll go back into my house and when you’re ready, we’ll be available to talk.”

“Very well.” He turned, heading back toward the medical examiner’s team that had arrived from Rochester and was about to pull the body from the water. It wasn’t something Kathy wanted to witness.

“Come on, ladies. Let’s go back inside.”

“You don’t have to convince me,” Tori said.

The three women trudged back up the small rise to the large house, past the big sign that had been erected just the week before. The name, Swans Nest, Kathy’s about-to-open bed and breakfast, was raised from the chiseled background of the pressure-treated wood and filled in with gold leaf. The image of a mama swan sitting on a nest was situated above it, and a temporary vinyl banner attached to it promised OPENING SOON.

They climbed the steps to the newly replaced front porch, and Kathy opened the heavy oak front door that had been restored to its former glory. Anissa was responsible for a lot of the repairs and refurbishments, but Kathy had invested months of sweat equity as well.

Upon entering the house, Anissa closed the door and she and Tori followed their hostess into the kitchen, where Kathy immediately put the electric kettle on, taking out cups, spoons, and cocoa.

“I made it that way all winter and you never complained.”

“That’s because—” But she didn’t seem to have an answer. “Then why’s it so chocolatey?”

“Because I add chocolate chips.”

“Are you gonna make it that way for your guests?”

“Probably not. The idea is for them to come here to be pampered. The three of us merely need to warm up.”

“I’m all for that,” Tori announced and took a seat at the marble-topped island. She seemed to shudder once again and blew onto her still-gloved hands to warm them.

Anissa joined her childhood friend at the island. “Got any cookies?”

“Have I ever not?” Kathy asked, pointedly.

Anissa shot Tori a smug look. She was the ultimate cookie monster.

Kathy scooped half a dozen sunflower seed cookies from the big glass jar on the back counter, placed them on a plate, and set it in front of her friends. Neither wasted time grabbing one—although Tori did at least remove one of her gloves first.

Kathy nodded, pleased at her friend’s reaction. “I need to have an array of options to offer my brides.”

Kathy was gambling that she would be able to throw bridal showers, and possibly host weddings and receptions, at Swans Nest. She’d been gathering recipes and testing them on Anissa and Tori all winter. Catering would be a big part of her business…she hoped.

“So what do you think the story is with that dead guy?” Tori asked.

“Seems weird that a body washes up when nobody’s been reported missing,” Anissa commented before taking another bite of cookie.

“Who do you think he could be?” Kathy asked.

“He could’ve come from Canada,” Tori offered, watching as Kathy spooned cocoa mix into the mugs. “I mean, he was wearing a plaid coat.”

Tori shrugged. “So do the Scots.”

“Yeah, around fifty miles,” Tori said. “But think of how those waves crash up at the Point.”

Tori nodded. “With a wind from the north, anything’s possible.”

“I’m sure the detective will put out a call. I mean, just because nobody has disappeared on Lotus Bay doesn’t mean the dead guy wasn’t a missing person. There’s a reason Ontario’s called a Great Lake.”

“Luckily we’re not going to have to worry about this guy,” Anissa said and reached for another cookie.

“Oh, no? What if they want us to look at his face? Besides the normal putrefaction of flesh, you don’t know what else could have been nibbling on him all these months.”

“You mean like fish and turtles and stuff?” Kathy asked.

“I certainly don’t want to look at a putrefied dead guy,” Anissa announced, glanced at her cookie, and decided to put it down.

“Osborn can’t make us do that, can he?” Kathy asked, aghast.

The kettle began to boil and Kathy poured the hot water into the mugs, stirring each of them before adding a heaping tablespoon of chocolate chips to each mug, again stirring until they’d melted and thickened the liquid. She passed the mugs around.

Anissa blew on her cocoa to cool it. “How long do you think it will be before Osborn knocks on your door?”

As if on cue, the bell rang.

Kathy left the kitchen to answer it. She came back less than a minute later with Detective Osborn in tow. “Would you like some cocoa?”

“No, ma’am. I just wanted to make sure I have all your personal information.”

“Couldn’t you just look it up in your files from last year?” Anissa asked and Tori gave her a nudge to cool it.

Osborn took down their full names, phone numbers, and addresses.

“What’s going to happen to the body?” Kathy asked.

“It’ll be autopsied to try to ascertain the cause of death, and then go into the cooler for a time in hopes someone will identify it and assume responsibility.”

“And if that doesn’t happen?”

“The county will have to bear the expense of burial.”

“Apparently,” Osborn agreed. He stuffed his notebook into his coat pocket. “If you ladies will excuse me. I’ll be in touch.” He turned for the hall and the front door.

“Aren’t you gonna say thank you?” Anissa called after him.

Osborn pivoted. “What for?”

“For being good citizens and reporting the body.”

For a moment, Kathy thought Osborn might explode. But then he answered through gritted teeth. “Thank you.”

Kathy saw him out and returned to the kitchen to find her friends again munching cookies and sipping cocoa.

“Did you have to tease him?” she asked Anissa.

“You could get us all in trouble.”

“I predict the detective won’t bother. The guy drowned. End of story.”

The three of them looked at one another.

Kathy knew that she sure hoped that would be the last they heard about dead plaid guy. And yet … the tight feeling in her stomach told her otherwise.