A Companion Series to the Victoria Square Mysteries 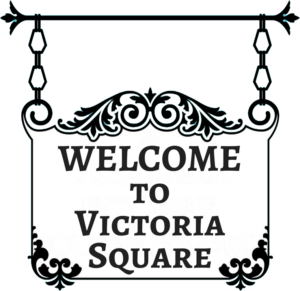 Victoria Square is home to a number of eclectic enterprises, anchored by Artisans Alley. Need a gift for family, friends or a special occasion? Visit Gilda’s Gift Baskets and Wood U. Something sweet to eat? Visit Tanner’s Bakery and Cafe, Sweet Sue’s Confectionery, or Booth’s Jellies and Jams. Have tea at the Square’s tea shoppe, Tealicious, and get your quilting needs at the Quiet Quilter. You can even stay  the night (or two) at Sassy Sally’s Bed and Breakfast. Through this series of stories, you’ll get to know the merchants on the Square and learn about the lives they lead.

(Scroll down for links to download our FREE cookbooklet, Tea For You!) 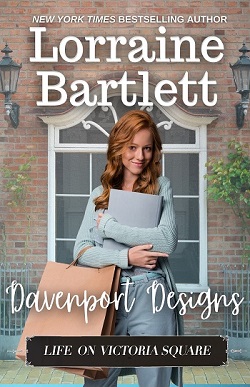 LIFE ON VICTORIA SQUARE #9 : A BASKET FULL OF BARGAINS

Former Sheriff’s Office detective Ray Davenport now owns the Wood U gift shop on Victoria Square, but it’s his talented younger daughters who steal the show with their displays and packaging designs. The girls believe they can earn money with their window-dressing skills for the other businesses on the Square, but the only merchant who hires them conspires to reap the rewards of their labor without paying a cent. And they’ve alienated the only person who can help them. Will they have to swallow their pride to ask Katie Bonner for help to get what’s owed them? 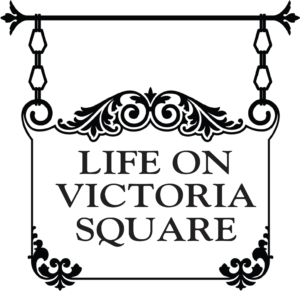 LIFE ON VICTORIA SQUARE (Volume I) 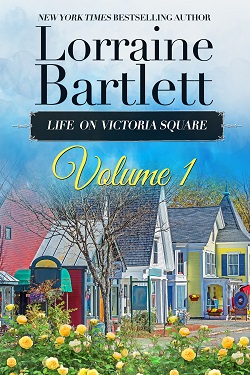 Now you can get the first six Life On Victoria Square stories in one volume in both print and ebook formats–and for a bargain price!

Contains
Carving Out A Path: A shoplifter learns a lesson about life and integrity.

A Basket Full of Bargains: Iris Drake is a strange duck with a secret.

The Broken Teacup: Katie Bonner receives a broken teacup in the mail–but it’s a mystery who sent it.

It’s Tutu Much: Bullies come in all sizes and ages. Can a dance class teach kids–and adults–how to get along?

The Reluctant Bride: Does a bride-to-be really want to get married?

Tea’d Off: The Square’s new tea shop is about to open, but not without problems.

The first story in the series is … 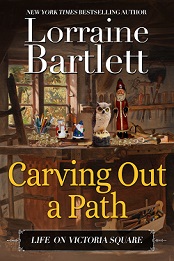 CARVING OUT A PATH

A young shoplifter not only swipes a couple of hand-carved figurines from Ray Davenport, owner of Victoria Square’s Wood U gift shop, but barrels into and injures Katie Bonner, manager of Artisans Alley. Upon his escape, the police are called, but before the ink is dry on the report, the boy’s grandmother drags the would-be thief back to return the purloined items. She’s got an agenda and great expectations?  Can Ray come through in a pinch?

The story behind the story … 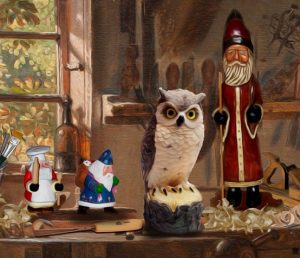 My father, Len Bartlett, was a jack of all trades. Literally. He was known as a “fitter,” and got his training at the Royal Dockyard in Portsmouth, England. When he came to the US, he found similar work, but also had side jobs. One of them was framing houses, which would come in very handy when he added rooms onto our home, family cottage, and he gutted and rebuilt my first house. He had lots of hobbies, too. He made jewelry, fixed watches and clocks, and in his later years he took up carving. (Santas were his specialty.)

I love the cover for Carving Out A Path, which was done by Wicked Smart Designs. In it, the designer was able to incorporate three of my father’s wood carvings. The tall Santa even won an award from a prestigious contest in Berea, KY  One of Dad’s carving buddies moved to KY from Western NY and wanted to make the same design, but he needed to actually see the finished project. So my father mailed the Santa to him, not knowing that it would be entered in the contest. So imagine my Dad’s surprise when the carving arrived back home with that first place ribbon!

I own more than 100 of my Dad’s carvings, and I enjoy looking at them every day. I hope you enjoy the three Santas on the cover. 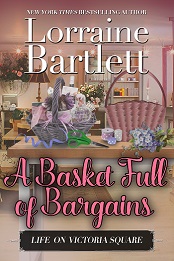 #2 A BASKET FULL OF BARGAINS

Iris Drake is an odd duck. She knows everyone at Artisans Alley arts-and-crafts arcade, but nobody knows her. When she walks into Gilda’s Gourmet Baskets on Victoria Square, she’s a stranger there, too—but not for long. Yet she hasn’t to come to Gilda to buy her wares—she’s there to sell some of her own. All goes well until Iris’s secret is exposed. Should Gilda step in to make things right, or walk away from an unpleasant situation? 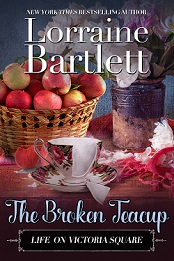 Katie Bonner needs a pick-me-up one cold and gloomy fall day, and the US Mail delivers—literally. A mysterious package arrives at Artisans Alley with her name on it, but the return address is obscured and the treasure inside, a beautiful bone china teacup, is broken. Before Katie can open the accompanying card, she’s called away and one of the vendors mistakes the package for trash. Katie makes a quick rescue, but the card is gone. Who sent the cup? What is its significance? Can Katie solve this mini mystery? 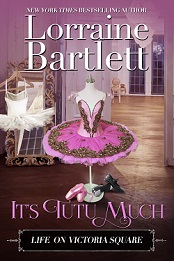 Bullies come in all shapes, sizes, and ages. Dana Milton finally opens her own dance studio on Victoria Square and one of her Broadway Babies (age 8) is a classic tyrant. Can she teach her students about respect for one another—and when it’s time to stand up for oneself, or is it all tutu much? 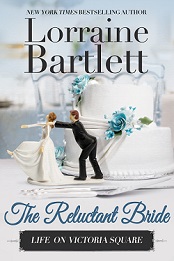 Don Parsons and Nick Ferrell bought a ramshackle Victoria spinster and plan to transform her into a Painted Lady. Weddings and other parties are a part of their business plan. They’ll be hosting a small ceremony and reception for bride-to-be Lauren Washborne … except she doesn’t seem all that enthusiastic about her upcoming nuptials. Don wants to know why—but Nick is against the idea. Will Lauren have a chance to live happily ever after, or will her suitor be left at the altar? 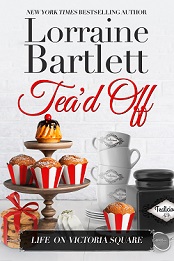 With the grand relaunch of Victoria Square’s tea shop, Tealicious, just days away, Nona Fiske decides it’s time to sabotage it and its owner, Katie Bonner. With gossip, innuendo, and outright lies, Nona tries to turn the other merchants on the Square against Katie. But Katie has learned how to deal with people like Nona. Can she kill with kindness?

This story takes place between the Victoria Square mystery novels Yule Be Dead and Killer Ink. 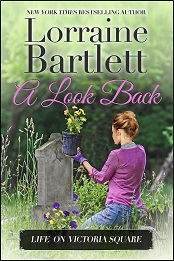 On the anniversary of her great Aunt Lizzie’s death, Katie Bonner reflects on the course of events that led her to be the custodian of Artisan’s Alley–from the moment her husband took their savings and invested it in a dying business to the death of its founder, Ezra Hilton. And it’s with tears of sadness and joy that Katie contemplates her uncertain future.

This story takes place just before the events in the Victoria Square Mystery (#7) A Murderous Misconception but may be read as a stand-alone introduction to the series. 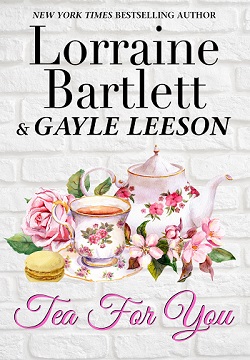 These are some of the recipes Katie and Telicious’s chef/manager, Brad Andrews, prepare for their customers. We hope you enjoy them, too.

*Amazon has decided not to distribute this book for free to all countries. Check the Worldwide link and click on the flag for your country to see if it is listed for free. If not, please check out the apps from the other distributors where the book is free.

Thank you for your patience and understanding.