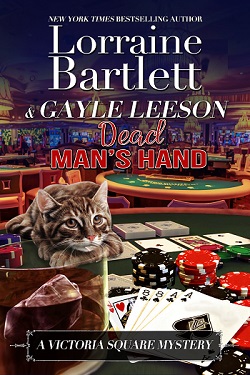 It’s all fun and games when Katie Bonner and her friends play poker for chocolate-covered peanuts, but the very next day Jamie Seifert collapses and dies after visiting Katie’s tearoom on Victoria Square.

Katie’s business in on the line and she needs to prove Jamie wasn’t poisoned at Tealicious. Her first order of business is to locate the mysterious woman he was dining with, and her next step is to go undercover at a nearby poker club where Jamie won big just a week before. It seems everyone there might have had a motive to rub Jamie out…and if they learn Katie has been lying to them, she might be next!

“Ms. Bartlett and Ms. Leeson have dealt their readers a fast-paced mystery in Dead Man’s Hand. I applaud the realistic characters and situations. I enjoyed a lighthearted event that seemed to set everything back on the right track, too. These authors are cozy pros and their stories never disappoint.”
–Escape with Dollycas Into a Good Book

Jamie’s ominous words don’t tell replayed themselves in her mind. What had he been going to say? Not to tell Seth about his being at Tealicious? Or the woman he was having lunch with? Or had he been about to say, don’t tell Brad I hated my lunch or don’t tell Brad lunch made me sick? But had lunch made him sick? As she’d just pointed out to the paramedic, he’d been ill the evening before. Had she—and everyone else at Sassy Sally’s—missed some indication of how sick Jamie had truly been? But, apparently, not even Jamie knew. Otherwise, he wouldn’t have been at Tealicious.

Katie realized the paramedic was addressing her again. “I’m sorry. What did you say?”

Eyes widening, Katie said, “No! I mean, I’ve…his partner is on his way to the hospital…but he’s… Jamie’s going to be fine…isn’t he?”

The paramedic wouldn’t meet her gaze.

At the hospital, the ambulance’s back doors were thrown open, and Katie kept out of the way while the emergency medical technicians swept Jamie out of the vehicle and into the building. Feeling bewildered, Katie walked through the ER’s public entrance.

“Are you here with a patient?” the security officer asked.

Katie nodded and he handed her a visitors’ sticker, which she slapped onto her shoulder. She then headed toward the reception desk. The woman she knew who’d been manning the desk the last time she’d been at this emergency room wasn’t there. In her place was a man who seemed too preoccupied to notice her existence.

Approaching the desk, she said, “Hello. My friend was brought here in an ambulance, and they just took him back. May I go—?”

She turned at the sound of Seth’s voice. His complexion was pale, and his fists were clenched in what she could only interpret as fear. “Seth.” She lunged toward him and they hugged. “We just got here. The EMTs took Jamie in back.” She nodded toward the treatment rooms beyond.

“Where’s he?” Nick demanded of the man at the desk.

“Married?” the man at the reception desk asked him.

“Unless you’ve got his health-care proxy, I can’t give you any information. HIPAA laws—”

“I know all about that,” Seth stated.

The man snorted a breath. “Let me check.” He picked up his handset, called the nurses’ station, and explained the situation. “Yes. I see.” He glanced at the trio. “I’ll let them know.” Hanging up the phone, he said, “There’s a team currently examining the patient.

The doctor will be out to speak with you as soon as he can.”

Nick squeezed Katie’s hand, and they shared a worried look behind Seth’s back. A team? That couldn’t be good. Especially in light of the paramedic’s next of kin question.

“What happened?” Seth demanded, pacing in front of the automatic double doors.

The entrance doors whooshed open, and a woman brought her crying baby into the waiting area. As she rushed to the reception desk, Nick herded Seth and Katie to a deserted corner of the room.

“He was having lunch at Tealicious,” Katie said. “I met Moonbeam there, but I saw Jamie across the room. He seemed fine.”

Seth resumed his pacing. “Was he alone?”

“He was with a woman. I only saw her from behind. Does he have a sister?”

Seth sighed and ran a hand through his hair. “No.”

“You have no idea who this woman could’ve been?” Nick asked Katie. “You hadn’t seen her in Tealicious before?”

“As I said, I didn’t see her face, but I didn’t recognize her. She was sharply dressed and appeared to be some sort of professional.”

Nick looked from Katie to Seth. “Maybe she was a doctor. He was sick last night at the party.”

Seth stopped pacing long enough to arch a brow at Nick. “What kind of doctor meets patients at a tea shop?”

“I never dreamed Jamie was sick enough to collapse in the street.” Seth let out a groan. “He was up and down all night. I should’ve insisted on bringing him to the emergency room this morning, but he said he was okay and had some errands to run.”

“Stop beating yourself up,” Nick said. “Jamie had medical training. Had he believed anything was seriously wrong, he wouldn’t have had to be told to go to the doctor. Right? I mean, sometimes these things creep up on you. Like low blood pressure. One minute you’re fine—the next minute you’re on your back looking up at the ceiling wondering what happened.”

“It didn’t happen to me,” he said. “It was my uncle. But it was sudden, and it scared the crap out of my aunt and cousins. But it turned out to be no big deal.”

“I won’t feel better until I’ve seen Jamie and spoken with the doctor.” Seth started back toward the reception desk just as a scrubs-clad man emerged from the doors leading to the examination bays.

“Family of James Seifert?” he asked.

He ushered them into a private consulting room. Noticing pamphlets on grief in acrylic holders and boxes of tissues placed about the room, Katie put her hand on the back of a chair to steady herself.